When Pedro Reyes became philanthropy chair for Sigma Alpha Mu at The University of Alabama, he knew he wanted to empower his brothers to make a difference, but he had no idea he’d be executing a major collaboration of every Greek organization on campus to raise $9,000 and countless supplies to support the Tuscaloosa SAFE Center. 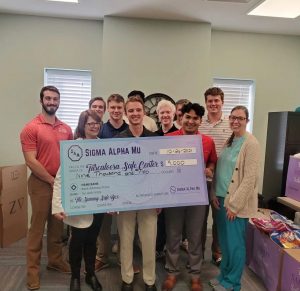 “I can’t take credit for it,” Pedro said. “One of our brothers said he’d heard about a box drive up north in a fraternity, and we thought about a few options, but then something about the SAFE Center came across my newsfeed, and I thought it would be a perfect organization for us to support.” The Tuscaloosa SAFE Center is a 24/7 sexual assault crisis center with nurses and other professionals trained especially for supporting survivors of sexual assault. “I called them to see what items they might need, and the answer was everything.”

Leading the Conversation to Change the Culture

With the issue of sexual assault and interpersonal violence growing in national prominence on college campuses around the country, Pedro and his chapter president, Cole Parker, recognized that the SAFE Center was a worthy cause for Sigma Alpha Mu to support, so they began the initiative of the Sammy SAFE Box.

“We want to make our campus a safer environment and change the culture around us by generating an important conversation around interpersonal violence. You can’t make a problem go away by ignoring it. The SAFE box is a good starting point for sparking discourse on these issues around the country, and it’s a good first step for us to take toward major change,” Cole said.

Cole and Pedro talked to other fraternities, and before they knew it, every single Greek organization at UA was on board. 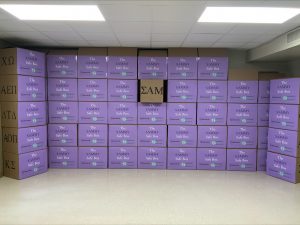 “Every fraternity jumped in on the box drive, and not just that, but they wanted to know how they could do more, how they could help,” Pedro said. He and Cole have also been in contact with an on-campus organization, MARS (Men Against Rape and Sexual Assault), to discuss education opportunities for fraternities and other groups.

“The outpouring of community support has been phenomenal. A large majority of the chapters we visited to deliver the boxes were super excited, like, ‘Hey, the SAFE box is here!’ To see that every fraternity and sorority on campus is so behind it and willing to promote this has been awesome. And non-Greek orgs have been asking how they can get involved in it, too,” Cole said.

“We’re limiting it to Greek organizations this year, but next year, we’re excited to get others involved. The Blackburn Institute, SGA and others from Student Life expressed interest, and we’re excited to see it continue to grow,” Pedro said. “It just grew and grew!” 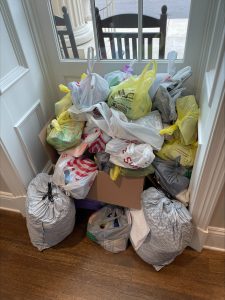 That excitement wasn’t just lip-service either. Pedro, Cole and their brothers delivered the boxes to all the organizations by Friday, Oct. 1 with a plan to make collection trips every Friday until fall break. “That first Monday, a house called to tell me, ‘Hey, you gotta come get this stuff because we have more to give but nowhere to put it.’ And then I got more calls like that, and eventually our issue was finding storage space for all the items we’d collected. SAFE Center employees were taking stuff home to store in their personal garages because they didn’t have room on site. It’s a good problem to have, but we want to find them a solution for that, too,” Pedro said.

In addition to the box drive, they also organized a fundraising event the week before fall break and worked to get establishments in the area to pledge to begin using drink covers and offer a form of the angel shot (a varying code word option that helps a customer communicate when they feel unsafe or need assistance). This fundraising initiative raised $9,000 for the Tuscaloosa SAFE Center beyond the supplies raised through the Sammy SAFE Box drive, which they presented to the center on Tuesday, Oct. 26.

Pedro said, “They told me we may have been the first fraternity to reach out to them to see how we could partner with them, but we have not been the last. I’m proud of that change and excited for the future.”