Far too often, someone sees an opportunity to help but gives in to any number of excuses that keep them from making a difference.

I don’t know where to begin.

I don’t have time.

This give-in mentality is a foreign concept for two brothers of Pi Kappa Alpha, Gamma Alpha Chapter at UA. Brice Shafer noticed the amount of food that was being thrown away at fraternity houses and thought there had to be an opportunity to share their resources with those in need. When he noticed the waste in 2020, he tried to partner with the local Red Cross, but because of restrictions related to the pandemic, nothing came of his efforts. 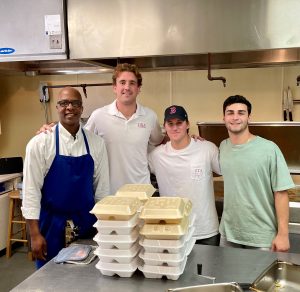 Brice passed the reins to his younger brother, Tyler Shafer, who ran with the idea and began Greek Gives. “Greek Gives is a student-led organization at The University of Alabama that takes advantage of the resources within the Greek system to benefit those in need within the Tuscaloosa area,” explained Tyler.

Fifteen fraternity houses have pledged to provide a certain number of meals per day to the Tuscaloosa Soup Bowl, a local soup kitchen. Tyler and his team coordinate drivers and volunteers Monday-Thursday to pick up and drop off the meals to the kitchen. By December 1, just two months into their operation, they had collected and donated over 2,000 plates of food and just over $1,000 in funds for the Tuscaloosa Soup Kitchen alone.

“We are grateful for their support and their help in feeding the hungry across Tuscaloosa,” said Susan Lavender, Executive Director of the Tuscaloosa Soup Bowl.

“I’m both proud and humbled by how our brothers have worked together with other fraternities to help a community in need,” Tyler said.