At the beginning of the Fall 2021 semester, Sam Rickert and his fraternity brothers partnered with the Interfraternity Council (IFC) and several other fraternities to host an event called Phriday Phrenzy that raised over $2,500 to support the 2022 UA Dance Marathon (UADM) fundraiser for Children’s of Alabama, a Children’s Miracle Network Hospital in Birmingham.

Sam has been a plugged-in student at UA since he arrived from Louisville, Kentucky his freshman year. Now the treasurer of UA’s Phi Delta Theta chapter and executive vice president of SGA, he’s thrilled to collaborate with his campus connections to make a difference for others.

“Coming out of 2020 and heading into my senior year, it really served as a reset and a point for us at Phi Delta Theta to consider what we wanted to do to support the community. We wanted to turn a new page in our chapter to focus on helping others and using our resources to not only improve Tuscaloosa’s community, but communities across Alabama,” Sam said.

So, when UADM approached him and Phi Delta Theta about partnering to host the event, they were happy to do it.

This wasn’t Sam’s first experience with Dance Marathons for Children’s Miracle Network either. “I’d been part of a six-hour marathon in high school, and it was really neat to see the impact we were able to have on the local community.”

Phriday Phrenzy took place at the Phi Delta Theta house on Aug. 27 and included live music, a cornhole tournament, and of course, food and fun – or perhaps “phood and phun.” UADM had partnered with Greek organizations in the past, but Sam said this time was different.

“We wanted to make sure we strengthened that bond and opened the doors so that going forward, events like this are an annual thing. Getting IFC’s support was important, and I’m excited for that relationship so that IFC will continue to support UADM’s efforts in the future.”

More Than Just a Fundraiser

Sam’s investment in UADM and Children’s Miracle Network goes beyond leaving a legacy of philanthropy and collaboration that will continue even after he graduates – for him, it’s personal, too. 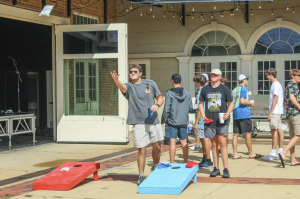 “When I was in high school, one of my good friends was diagnosed with a stage four fatal childhood cancer. She passed away our senior year, and she left a mark on our school and on all our lives. Seeing her experience made me realize that this is a problem that affects a lot of people, so I want to do my best to reach out to others, check in with them, and make sure my life is making a difference,” he said.

UADM is a year-long project that is entirely student-run and supported by UA’s Center for Service Leadership. UADM is one of many Dance Marathon programs held across the nation for college and high school students to raise money for Children’s Miracle Network hospitals local to them. UADM has had steadily growing support from UA students since 2012 and has raised more than $1.9 million in the years since.

UADM, which runs from April to February each year, concludes with BAMAthon, a 12-hour fundraising marathon that serves as the organization’s culminating flagship event. By the time BAMAthon rolled around last year, the organization had grown to more than 1,500 participants, each challenged to raise funds and awareness for Children’s of Alabama.

“UADM’s year-long fundraising program is truly a campus-wide effort, and we have no better partners than members of the Greek community, so we were thrilled to collaborate with Phi Delta Theta for Phriday Phrenzy,” said Will Bradley, UADM’s vice president of finance and fundraising. “We all call Alabama home for at least the four years we spend here as students. As a crucial part of the state of Alabama’s healthcare infrastructure, giving back to Children’s of Alabama is a great way for all of us to support our community.”

Sam’s thankful for every opportunity he’s had to give back, and Phriday Phrenzy was no exception. “It’s easy to get lost in tunnel vision in your own little world, but it’s great to get out of your comfort zone and connect with people you wouldn’t otherwise even meet to help others and do something good for the world.”