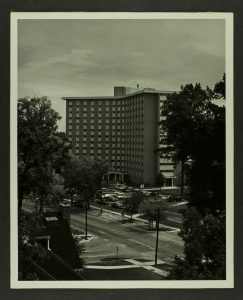 Located across from Bryant-Denny Stadium, Tutwiler Hall is one of the most iconic buildings on The University of Alabama’s campus. The original Tutwiler Hall was built in 1914 and was located where Rose Administration Building currently sits. The current Tutwiler was built in the year 1968 and has been serving women at UA for 54 years. To make way for a larger and more contemporary residence hall, it is scheduled for demolition on July 4, 2022. As a campus community, we commemorate the legacy of the historic building while awaiting the new and improved Tutwiler. To celebrate both events, in the coming months we will be featuring stories from past and current residents of Tutwiler Hall.

Mary Bess Paluzzi, former Associate Dean for Special Collections for UA’s Libraries and resident of Aliceville, AL, was a student at UA when the current Tutwiler Hall was first opened. She lived in Parham East from 1967-1969, and in 1970 joined the student housing staff at Tutwiler. She shared, “Tutwiler was big and there were lots of young women, and it was a much more active place than anywhere I had ever lived.” With only one entrance, working at the front desk was a task filled with constant interactions and energy. 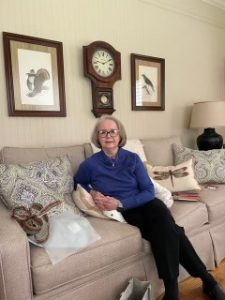 From the time Mary Bess lived there and even now, she said Tutwiler has been a place “where both Greek and non-Greek women could build a strong community. Women from all walks of life were able to find connection and still keep up with one another today.” Mary Bess still keeps in close contact with many of her fellow student workers and women she served at Tutwiler.

An advantage and privilege that many residents enjoyed during Tutwiler’s early years was exposure to UA administrators. Past UA presidents and deans of students would walk over from their offices at Rose Administration to have lunch at Tutwiler. In particular, Mary Bess remembers former vice president of Student Affairs and later president, Dr. Joab Thomas eating at Tutwiler daily. Dr. Thomas would bring his family with him as well, providing the women at Tutwiler many opportunities to get to know the Thomases. Of course, they also got to know top-level administrators and campus police well from how often they arrived at Tutwiler in response to false and prank-pulled fire alarms. 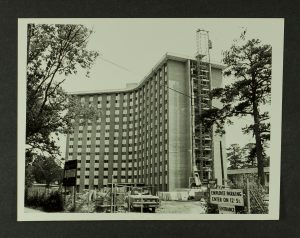 Mary Bess has some comical stories from the building as well. A particularly fond memory was when Tutwiler residents walked together to Rose Administration to throw Dr. Thomas (vice president for Student Affairs at the time) in the fountain after an on-the-road victory for the football team against the University of Southern California.

Being a resident at Tutwiler Hall made Mary Bess feel more connected to all that was going on at UA and in the Tuscaloosa community. “It really gets more special every year. When I read stories about what Tutwiler means to so many women, I saved them because even though it is different generations speaking, the stories are all the same.” she said.

Do you have fond memories of Tutwiler Hall? We’d love to hear from you! Additionally, to celebrate the legacy of the building, Student Life is selling exclusive memorabilia from Tutwiler as well as personalized pavers for a Tutwiler Promenade in the new space. The deadline to order a paver is Feb. 14, 2022. Reserve yours today!