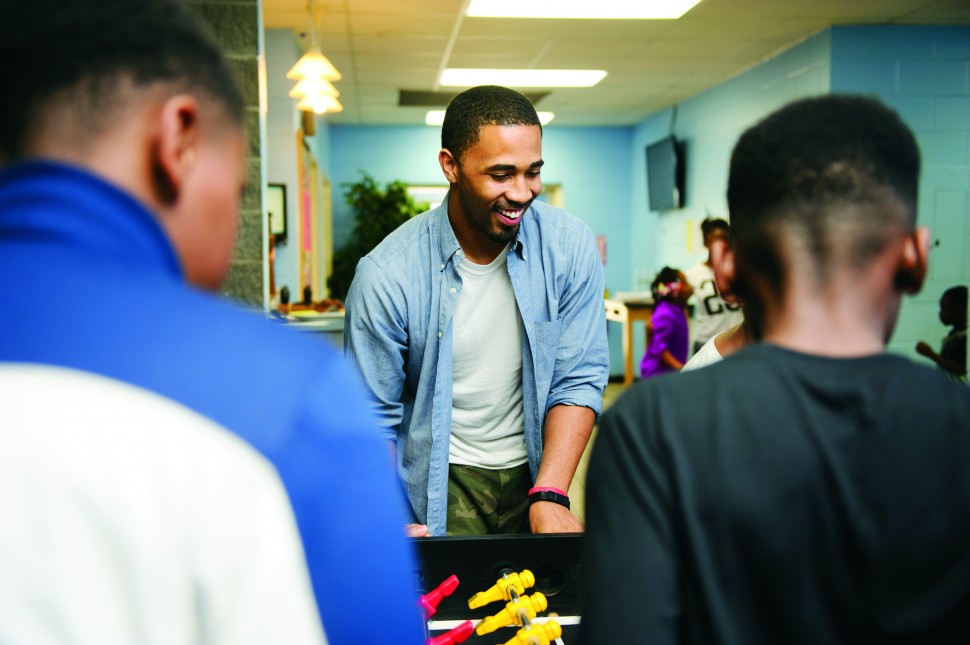 Tyler Merriweather stumbled across the opportunity to work with UA Crossroads while searching for bubbles.

“I knew the previous director always had bubbles, and I wanted my kids at the Boys and Girls Club to have some, because I knew we would be going outside that day,” said Merriweather.

After chatting with the new UA Crossroads Director Lane McLelland, Merriweather not only found bubbles, but also found himself a new member of the Crossroads team. He currently serves as the student director of campus engagement for the organization.

“It’s taught me so much about the community, the importance of service, and how our cultural differences allow us to better serve the community,” said Merriweather.

McLelland said Merriweather is an asset to the Crossroads team because of his positivity and interest in meeting new people.

“It takes real courage to love all people as optimistically and as enthusiastically as Tyler does,” McLelland said. “He inspires me on a daily basis to believe we can build a better world together.”

Merriweather said he enjoys the work and the change he is witnessing.

“Lately we’ve received a lot of invitations to come and do inclusive excellence workshops with different organizations to teach them how to become more inclusive, and they’re really enjoying their experience,” Merriweather said. “I think the campus is definitely moving to a more progressive atmosphere.”

In addition to Crossroads, Merriweather volunteers countless hours at the Boys and Girls Club, where he began working in high school. He had been a member since kindergarten. He said his relationships with the kids keep him coming back.

The kids go to “Mr. Tyler” for just about everything.

“Sometimes the kids walk up telling me about good decisions they’ve made – those moments are priceless,” Merriweather said. “You can’t pay me enough to tell me that I influenced a child to make a better decision than they would have.”

Merriweather said he is quick to encourage students to chase their dreams. None of the kids know that Merriweather met President Barack Obama as the Southeast representative for the Youth of the Year Campaign, nor do they know about his Realizing the Dream Horizon Award. He doesn’t want them to compare themselves to him.

“I don’t want kids to look and me and say ‘I have to be like Mr. Tyler,’ I want them to look at me and say, ‘I can be better than Mr. Tyler,’” said Merriweather.

It is because of this mindset that McLelland said she believes Merriweather has a great impact on everyone he encounters.

“Tyler is a person of vision,” said McLelland. “He envisions a better future for himself and for all of us. The question is not what will he accomplish, but how many more people will accomplish something they never dreamed of because of him.”

During his time with the Boys and Girls Club, Merriweather has served as teen program coordinator, program coordinator, director, and interim director. While he only has time to be a team leader during the school year, Merriweather said he will continue to work with the Boys and Girls Club, especially until the two kids that started his first year graduate from the program.

“When I started in the summertime, these two stuck around and they come to Mr. Tyler for various things and they’re always doing things that make me say ‘I’ve got to know where you go,’” said Merriweather. “They’re like my little brothers.”

A career in elementary education seemed like the only logical choice for Merriweather, given his love of kids. This spring he has served as a student teacher for Martin Luther King Elementary School.

“I am learning so much,” Merriweather said. “I feel like right now that I’m working with some students with some of the greatest potential to succeed, if we can challenge them and get their minds on the right path.”

Merriweather also works as an ambassador for the College of Education. He talks to high school students about joining the program and fosters relationships with school administrators.

“As an ambassador, I see where there’s a great need for thriving teachers who are dedicated to change,” Merriweather said. “I’m able to meet so many people and learn so much about the mind and the learning process and how as a teacher we can learn to communicate better with people.”

As a first generation college student, Merriweather is thankful for a family that pushed him to accomplish great things.

“They always told me ‘go get it,’” said Merriweather. “My dad has always been a worker and wanted us to work too. He used that to fuel me to go out into the world.”

Ultimately, Merriweather hopes to earn a master’s degree in elementary education and become a principal.

“I’ve always said I wanted to give back to Holt, the town I grew up in, but I’m spiritually led, and I think God is now showing me that there is an even greater purpose for me than that,” Merriweather said. “Wherever I go I want to be consistent and invest in that community.”