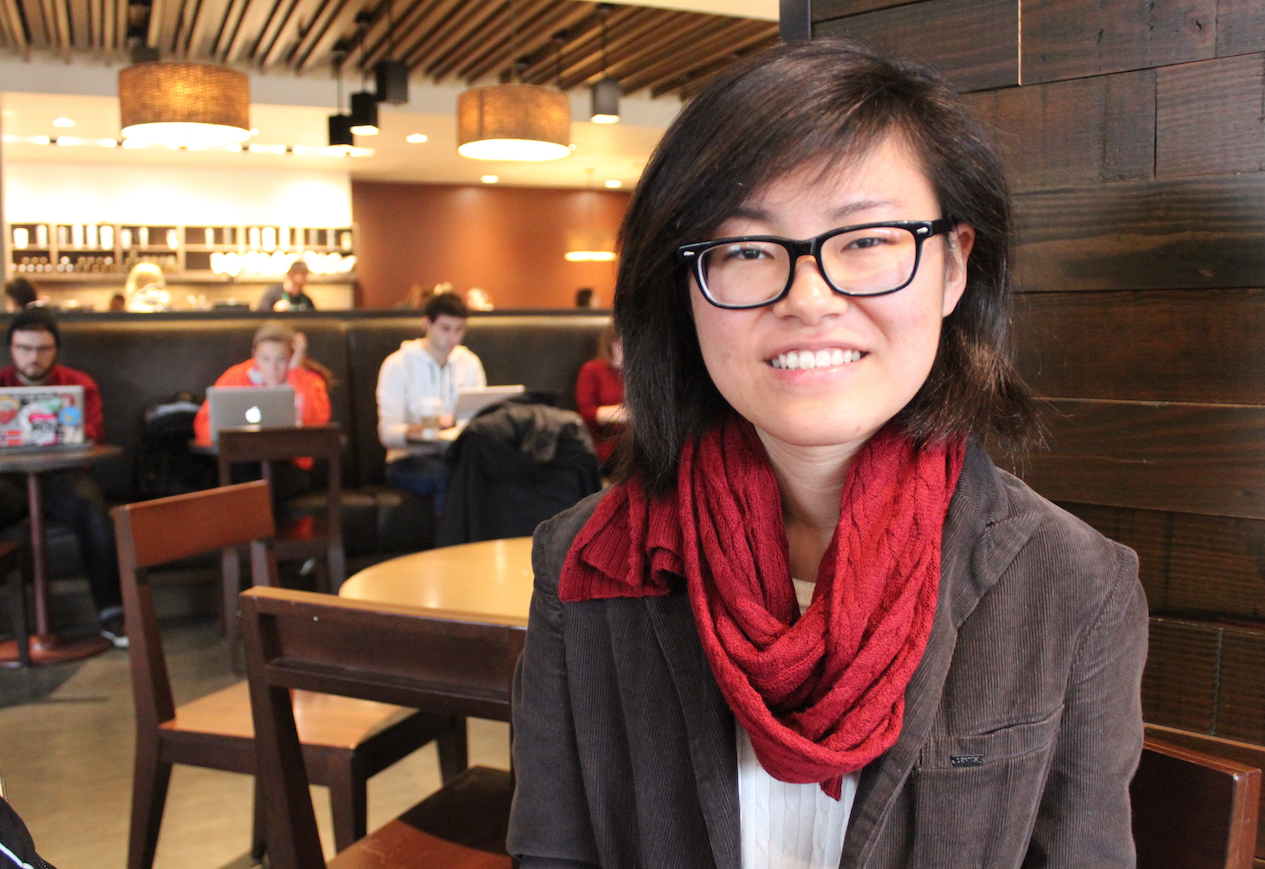 At the front of the room stood UA’s ACS president Shuwen Yue, a senior with a dual major in chemical engineering and chemistry, who first recognized the need to revive the organization as a sophomore.

After one year in ACS, Yue was elected president, and worked diligently with other ACS officers to create a presence for the organization on campus.

“The biggest change was just doing better with advertising, appealing to students, and sharing the opportunity with students through personal conversations,” Yue said.

Each month, Yue finds speakers with careers in math or science related fields to come encourage, inspire, and connect with students. It helps that Yue is passionate about both fields, and enjoys dedicating her time to research and teaching.

“When I first started college, I can’t say that I was really gung-ho about chemical engineering, but I like math and science and it seemed to be a really interesting field,” she said. “I didn’t know enough about it to be confident in my decision, but now four years later if I had to do it all over again, I would definitely still choose chem-e.”

The ACS plays a minor role in Yue’s college experience compared to the research she has been involved in for the past four years, including summers.

Yue’s scholastic efforts began as early as the summer before her freshman year at UA, when she began working on computational modeling of biofuels in the lab of Dr. David Dixon from UA’s chemistry department.

“Biofuels are a very promising source of alternative energy to fossil fuels, but the biggest problem is that the current conversion process is much too expensive for it to be viable, so I’m looking into optimizing that conversion process and making it more cost effective,” Yue said.

Dixon said he predicts that Yue will make significant contributions to science and engineering throughout her career.

“Shuwen is an extraordinarily bright and hardworking student,” said Dixon. “She works extremely hard and has shown real dedication to her research. She was truly working quite independently, and successfully, by the end of her first semester of research, a truly impressive feat for a first semester freshman.”

Yue also works on carbon dioxide capture in the chemical engineering lab of Dr. Jason Bara. She said the most difficult part of research is patiently waiting for positive results.

“I certainly get frustrated with it at times, but I really enjoy it too,” Yue said. “The fact that I know that it is making an impact at some point is what’s driving me. My dad pursued a PhD in geology, and just watching him do that as a kid is part of what motivated me to pursue research.”

Yue’s efforts have garnered her a good bit of attention across campus. Yue was recently named recipient of the 2016 Catherine J. Randall Award, given annually to the most outstanding student scholar at UA based on GPA, rigor of course study, and extraordinary scholarly or creative endeavor.

“Receiving it was quite a surprise, there are many incredible students across campus who are equally as deserving,” said Yue. “I am grateful for the overwhelming amount of support and guidance I’ve received from all my advisors and professors that’s led to me to where I am now and receiving this award.”

In an effort to do something that spurred an immediate impact, Yue developed the Greener Tide initiative through the Blackburn Institute. The program, which began for the first time this past fall, focuses on recycling during UA game days. Yue first learned about the need by contacting UA Recycling to ask how she could help.

“My research in my labs and what I do is really focused on environmental awareness and energy efficiency, so I wanted to do something that had an immediate impact on the environment, and I saw this as an opportunity to do that.”

Yue said that, while the program still has a lot to improve upon, it makes her happy to see the results of her efforts.

“In research, when you do something, it may be years before it has any impact and a lot of times it doesn’t have any impact at all, so this was a great way for me to see something being done now,” Yue said.

Also to get a lot of other people interested in the environment, people that weren’t at all interested before. I think that might have been the biggest impact we’ve had just sharing that information and getting others interested in it.”

Yue has also served as a resident assistant in Ridgecrest South for the past three years, and she is a member of the Computer-Based Honors program and University Fellows Experience.

“I don’t sleep very much. The past few semesters it was a lot to do,” said Yue. “Research has always been the priority, and the rest just kind of fell into place.”

With graduation quickly approaching, Yue is faced with the tough choice about which graduate school to attend in order to continue her research and eventually earn her PhD. So far, she has received acceptance letters from Princeton University and Columbia University.

“At this point, I think I’d like to be a professor, in academia, so I’d like to teach and research and mentor other students,” said Yue. “At least that’s what I have in mind right now.”